Use the following process to write ONE paragraph about each work of art linked below. You may need to do some research (for context), but this is not a research project. Rather, you are writing down what occurs using each of the processes discussed in this course:

•Description (how it looks, how it is made)
•Analysis (how you respond visually, how it feels)
•Meaning (content) (what the subject is, what symbols are present)
•Context (who made it, when, what culture, time or style)
•Judgment (is this a good example of this art, is it an important work to art history, do you appreciate this work, what do you think about it)?
•Do the two works have anything in common? Links to the images:
•Grant Woods’ 'American Gothic’ •African Kongo culture 'Power Figure’

Then, Write two to three paragraphs on each of the following topics. You will be doing a critique by describing, analyzing, and stating an opinion on one of these topics. Cite examples of at least three specific artworks for each statement to support your positions. Be sure to use the MLA format. •Art is for entertainment value only. •Art helps humans explore their lives and their world. 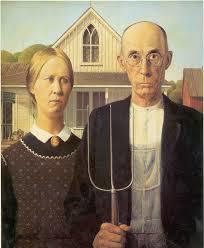 ‘American Gothic’ is an oil- painting made on wood in 1920, and reflects the movement of regionalism (1891-1942), a realistic modern art. In the backround is a small house with a gothic style windows. The models used for this painting, were of a dentist and a woman who was probably the sister of the painter, Grand Wood. The whole representation is accompanied with such a mystery, because one researcher or a viewer has to relate the wrath with the rest of the painting. However, I couldn’t find an appropriate statement if the famous American piece of art is in the public domain or at a private collection.

The wrath is a symbol of conquest, of work, but we’have to figure out what was supposed to represent. Does the purchase of the house in the painting was from the outcome of working for years; or a representation of defending somehow the house or the neighborhood by invaders? And this suggestion comes out because the painting belongs to the movement of regionalism- The word invokes socioeconomical structure and decolonization. But again wondering, what is the relation of American Gothic, regionalism, the wrath, and the couple. Also quite strange that the woman is looking in a different angle than the man/dentist, who looks the painter at his eye.

Regardless the meaning behind it and speaking objective, it’s an amazing piece of art because it provokes admiration and excitement. It is an important work for the Art History because it reflects/ reveals inseparable pieces of the American History. Although the couple suppose to look like farmers ( because of wrath), they wearing good clothes; The style of the painting is elegant, has realistic portraiture and landscape, and generally provides a work of a high skilled artist. 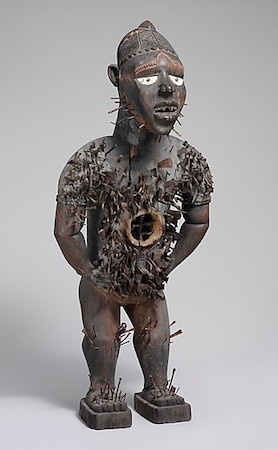 Power Figure is a wooden sculpt representing an African native and specific from the Republic of Congo back in 19th century. The sculpt is decorated by several of materials to shape the whole form, such as, leather, iron, ceramic, resin, etc. According to the title of this artwork, the sculpt displays a work of magic or made for/of powerful ritual purposes. The needles placed all over the body is a testimony of work of voodoo made by a specialist. Most of the materials are placed in such way to attract spirits. However, it’s not proved if it was used to protect a community from invaders, or it was just used for religious (pagan) purposes, with the sculpt to have enthroned a king or a royal personality of the country, as it was happening in northeastern Africa, and in countries such as Egypt or Southern in Nubia.
Unfortunately, most of these special artifacts had been stolen from European mercenaries (colonizers). Therefore, it would be interested to explore and discover how much useful it could be if it was about to get used by the hands of strangers as a stolen piece of art. Could it still be working as a charm or a curse?

Do the two works have anything in common?

Both artworks dealing with the sociological, structural, cultural, and geographical backround of both America and Africa. Throughout the World War II, most countries led to a political decolonization, and this is probably the message which Grant Woods was ‘spreading’ out in most of his artworks. The message was about the struggling of some cultures and through obstacles that came confronted by colonized and postcolonian world.
Regionalism was a realistic modern art in its form, and political meant the separation of a region or a country to smaller ‘spatially’ governed pieces or states. In other words, it seemed to be opposed from Nationalism. In addition, artistically, it was dealing with the usage of local color, the physical environment of an area (very obvious in the paintings of Woods), the facts of a time and space, and the quality of people from a specific geographic area. Here are a few examples of other paintings made by Regionalist painters to support my positions. 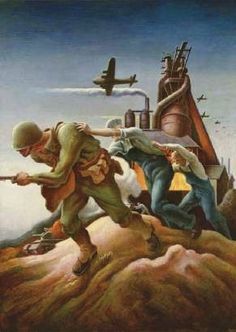 Thomas Hart Benton- ‘WW II Back Him Up’ 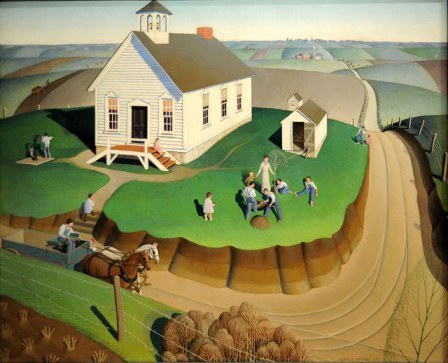 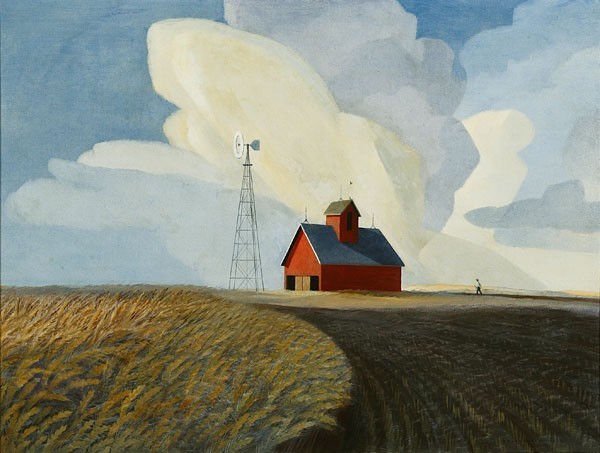