For thousands of years sculpture has (literally) been the bedrock of three-dimensional art. Carved from stone or wood, or cast in bronze, so often figurative and, from a western cultural perspective, in a realistic style.

The advent of modern art in the first half of the twentieth century has radically changed the formal characteristics of sculpture and, in some cases, the content. View these three sculptures and comment on the issues of form and content in each one. 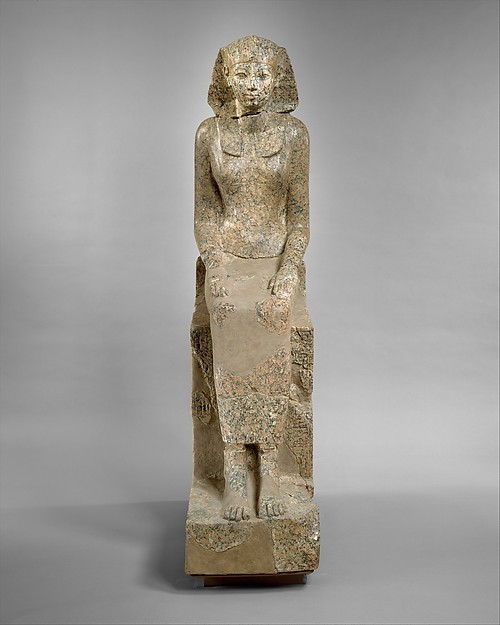 AS with most Egyptian sculptures of figures of interest, this granite sculpture of female Pharaoh Hatshepsut follows the traditional conventions and forms used at the time as can be witnessed by her nemes headcloth – a royal attribute usually reserved for the reigning king. Furthermore, the sculpture importantly maintains its form in that the ruler is represented as a tall and strong royal figure. However, it has been altered in a few respects to depict the more feminine attributes as can be seen in her visage, slimmer waist, and breast-shaped torso. The meaning remains consistent with that of her male counterparts: she must be revered and respected just the same. Moreover, because of the hint of a smile on her face the artist is also conveying that she was a friendly and truthful ruler who could be trusted and is thus worthy of their adulation. The smile could also convey her maternal qualities of protecting and nurturing the kingdom as she would her own child. 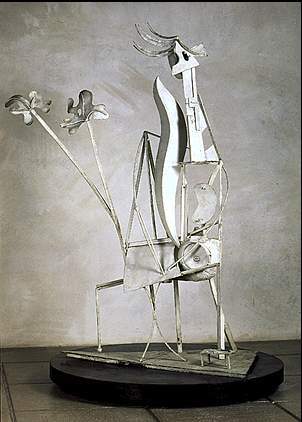 In his long career as an artist, Picasso produced many sculptures which didn’t necessarily deviate that much in style or form than from his paintings. In his bronze sculpture Woman in the Garden, Picasso maintains his abstract form to represent a subject that is one of his favorites and most illustrated throughout his career, namely women. With its three-dimensional form, Picasso is able to mesh his subject with elements of a garden. We can see that her head is like a bird house – with just one eye but fancified with distinct curled plumage. Apart from the numerous elements and forms that comprise the rest of the body and which can be interpreted in innumerable ways, Picasso completes the form majestically with the two-pronged tail topped off with large foliage. Both the head and the tail sections are held high and proud also appearing to be in motion which denotes excessive levels of pride and conceitedness. It commands the viewers’ absolute attention; it’s screaming: look at me! At the same time, I think the artist is also trying to convey that he himself should receive the same level of attention for his sculpting abilities as much as he does for his painting. 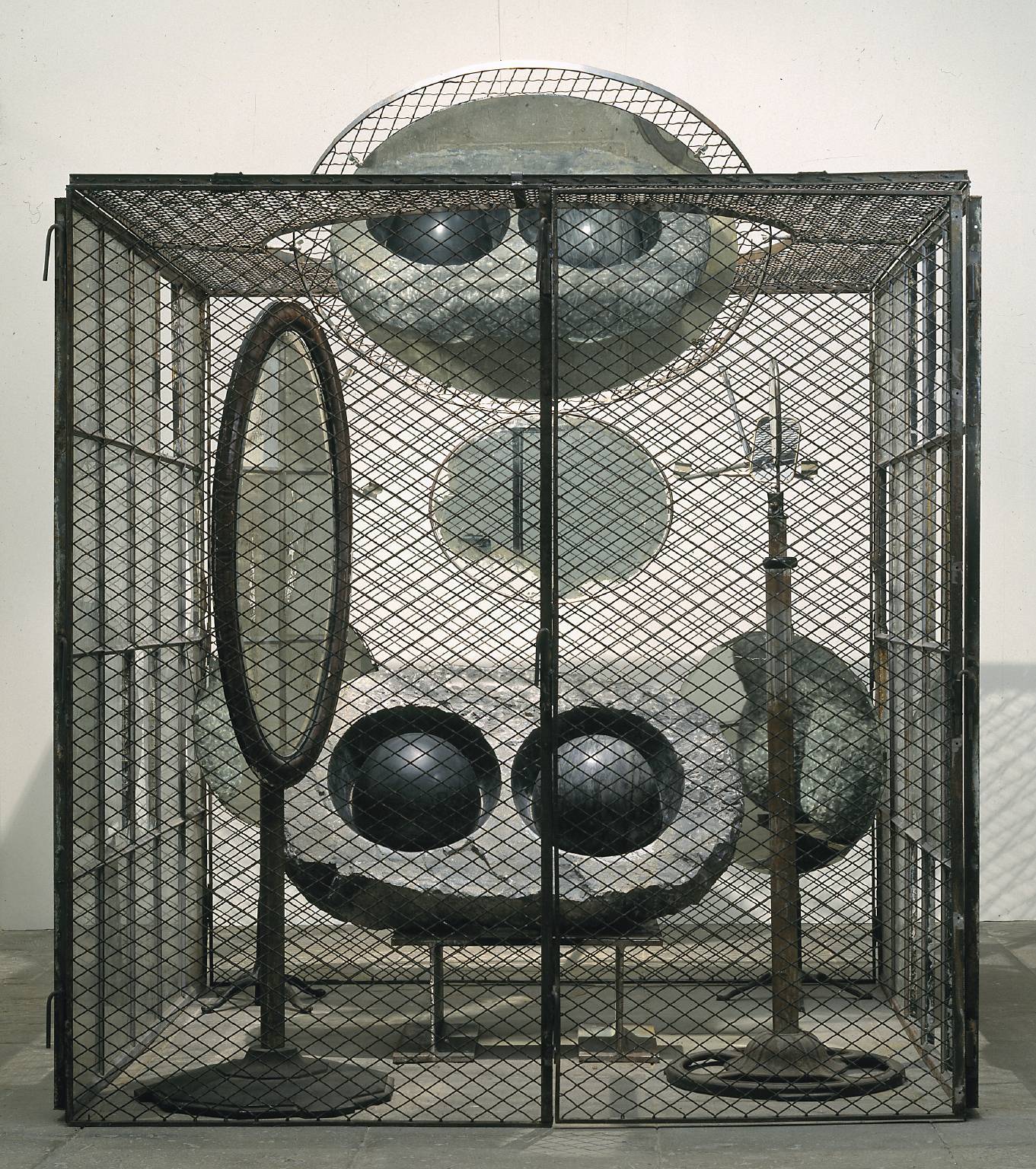 In Louise Bourgeois’ ‘Cell: Eyes and Mirrors’ the most prominent features are the large black “eyes” which protrude from their stone sockets. Next, the mirrors carry the next most significant part of the installation, apart from the cage (cell)
itself. The top panel which also features a pair or large black eyes rotates 360 degrees to reflect the different aspects of the interior of the cell. To me, I think the artist is trying to transmit to viewers that we live in an age where we are constantly under surveillance by the all-seeing authorities from all possible angles. Moreover, the all-seeing eyes are strongly accentuated by both their size and color. The eyes are unusually big and dark which signifies that these are forces not to be reckoned or meddled with. The warning is loud and clear. This premise is further supported by the mirrors found within the cell. This can be a metaphor for how us common citizens are trapped inside a “matrix” or large cell which can be both the physical realm in which we live (the world) as well as in cyberspace. There’s no escaping it. The cage itself signifies that we are trapped inside and there is no way out. Lastly, the form and matter of the “outer skin” – the grid/mesh can easily suggest that those trapped inside the cell can both see, hear, and smell what’s on the outside but not access it. The materials – steel and iron – are strong and virtually indestructible to those trapped inside. It’s a huge tease and taunt by the authorities, if you will. In other words, those living within the matrix are made to suffer while being ridiculed, as they know and can see that freedom lies merely inches within reach, but are trapped and powerless nonetheless. It’s an extremely powerful statement about the current state of globalization and world domination in this period of human civilization.

Sculpture Egyptian- Carved form in persistence with the meanings to a woman and her representation in Egypt. Who she is and her story along with her spirit role amongst the gods.
Woman in the Garden- a construction by picasso rather than his paintings. Perhaps this form being done in 3D represents the liveliness and real feel of her being there and the surroundings as we would surround or encircle her in the garden as she is in it as well.
Cells: Eyes and Mirrors- Installation telling a story within things change or assemble at different times in between and near.
Pretty cool!

An excellent case of the cutting procedure is found in the Water and Moon Bodhisattva from tenth-century China. The Bodhisattva, a Buddhist figure who has achieved illumination yet chooses to remain on earth to show others, is perfectly cut and painted. The figure is right around eight feet high, situated in a rich posture on a lotus sprout, loose, gazing straight ahead with a quiet, generous look. The all-inclusive right arm and raised knee make a stable triangular organization. The stone worker cuts the left arm to mimic muscle strain inalienable when it bolsters the heaviness of the body.

In another model, you can see the high level of alleviation cut from a unique cedar wood obstruct in the Earthquake Mask from the Pacific Northwest Coast Kwakwaka’ wakw culture. It’s uncommon for covers to represent a characteristic occasion. This and other mythic figure covers are utilized in custom and service moves. The wide zones of paint give an uplifted feeling of character to this veil.

A shape is produced using a unique wax mold that is liquefied away to make a negative hole into which liquid metal is poured. Customarily, throwing materials are normally metals, nonetheless, they can likewise be different cold-setting materials that fix in the wake of combining at least two parts; models are epoxy, solid, mortar, and earth. Throwing is frequently utilized for making complex shapes that would be generally troublesome or uneconomical to make by different strategies. It’s a work escalated process that occasionally takes into consideration the formation of products from a unique article (like the mechanism of printmaking), every one of which is very strong and precisely like its ancestor. A form is normally annihilated after the ideal number of castings has been made. Generally, bronze statues were set on platforms to imply the significance of the figure portrayed. A statue of William Seward (underneath), the U. S. Secretary of State under Abraham Lincoln and who arranged the acquisition of the Alaska regions, is set almost eight feet high so watchers must gaze toward him. Remaining beside the globe, he holds a move of plans in his left hand.

Some cutting edge and contemporary figures join development, light and sound. Active models utilize encompassing air flows or engines enabling them to move, changing in structure as the watcher remains set up. The craftsman Alexander Calder is renowned for his mobiles, unconventional, dynamic works that are unpredictably adjusted to move at the scarcest wisp of air, while the models of Jean Tinguely are contraption-like and, like Nevelson’s and Butterfield’s works, built of scraps frequently found in trash dumps. His mechanized works display a mechanical stylish as they hum, shake and create clamors. Tinguely’s most well known work, Homage to New York, ran in the figure garden at New York’s Museum of Modern Art in 1960 as a feature of a presentation by the craftsman. Following a few minutes, the work detonated and burst into flames.