Using this list of online galleries or other sources you are familiar with, research and explain three examples of sustainable technologies and 'green' architecture. These could include anything from energy production sources to architectural design and engineering or urban planning models.

What are your reactions to these examples? What is the context surrounding them? For example, how will they be used? What are the costs involved? Will they replace or interact with existing designs? Do you think they are good alternatives to traditional design?

Include images or links for each of your examples, and be sure to cite all your research sources used for the worksheet. 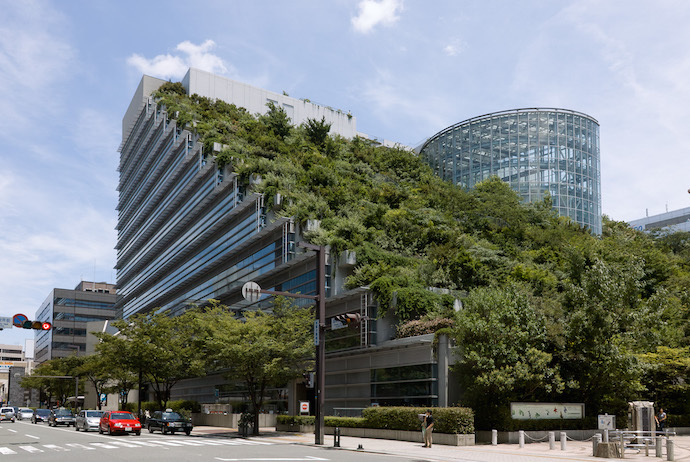 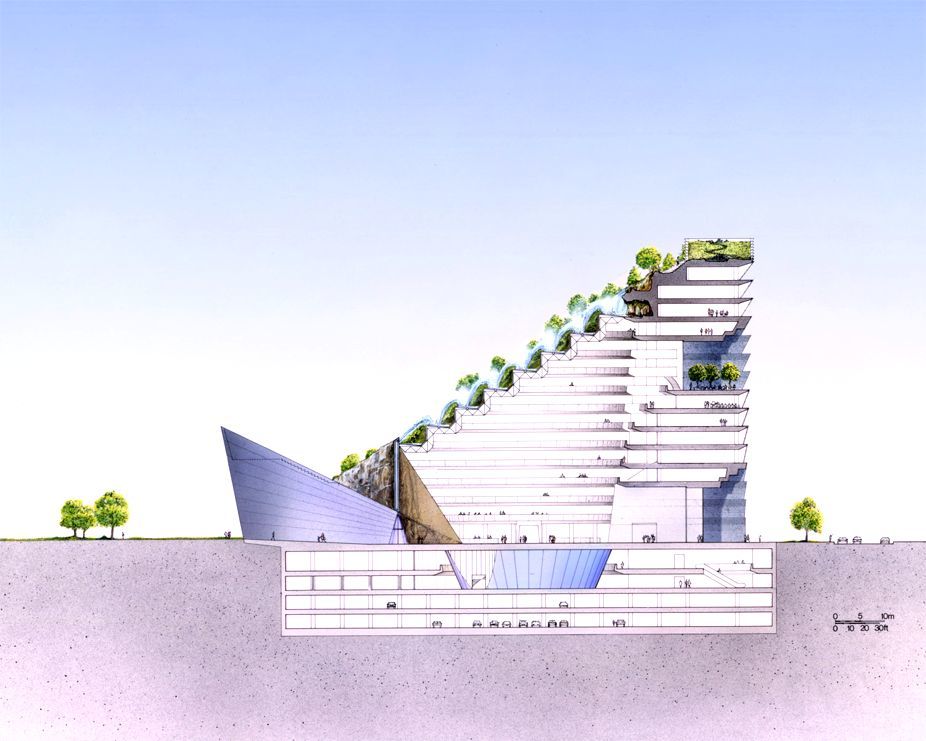 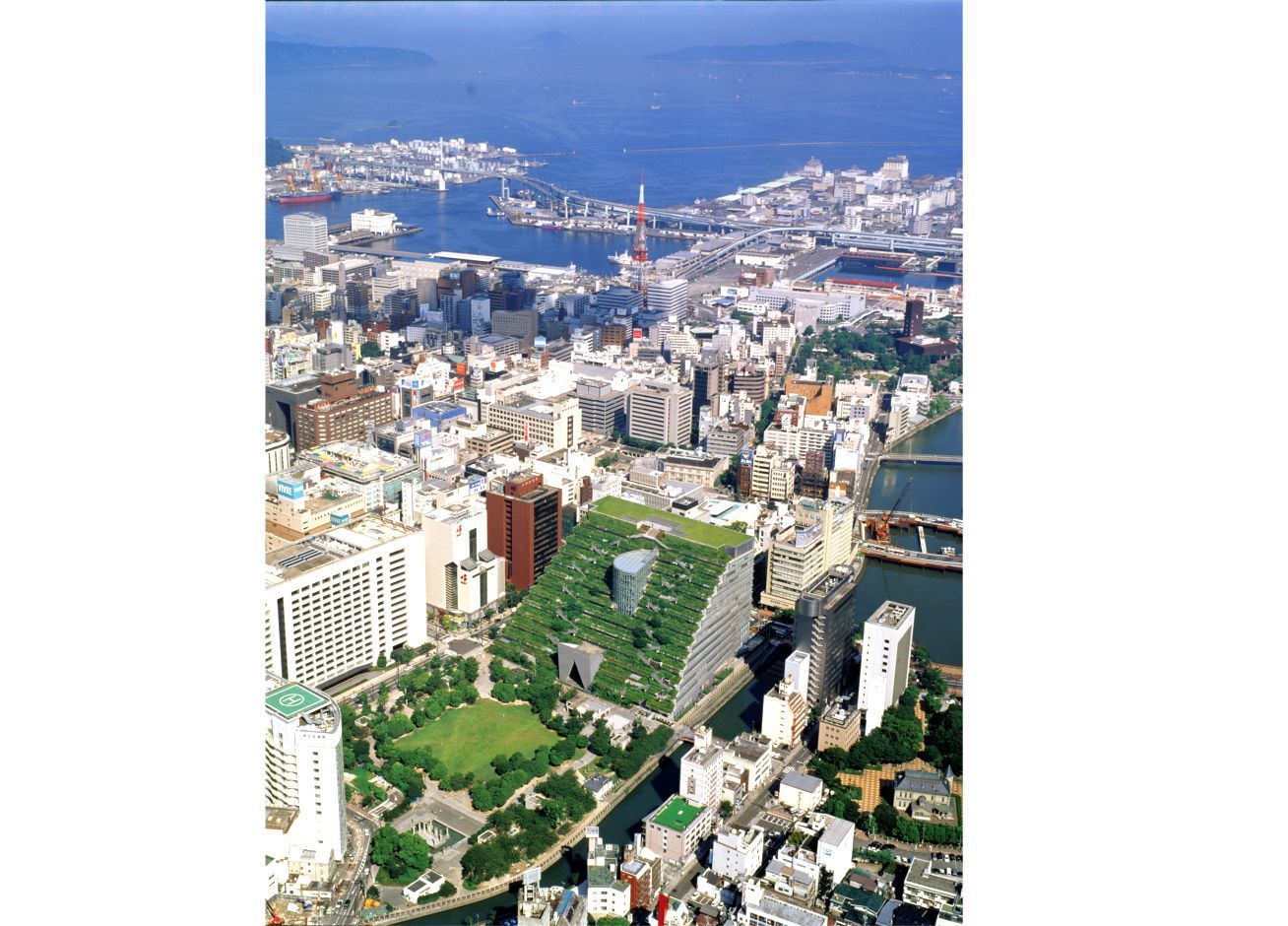 Built in 1994 and opened the following year, the ACROS Fukuoka Prefectural International Hall fuses lush greenery in its unique architectural concept to produce what we can refer to as eco-architecture. At first glance, the “green” side of the building almost resembles the step pyramid façade of an ancient Mayan temple which has been overtaken by lush vegetation, this right smack in the middle of the city. It clearly stands out from the crowd, as it is the only building in the vicinity to flaunt its greenery, so to speak. One the south side facing a small park, the building ascends 14 floors in a step fashion, as with a pyramid. Each floor is comprised of landscaped terraces fit for relaxation, meditation, or a simple escape for its urban occupants from the city. A unique feature of the building lies in the fact that it interacts or even appears as an integral part of the adjacent park – the only other green area of the city. The inside of the building also integrates the exterior such as with its large atrium. Overall, its unique design and organic look makes it a splendid example of green architecture. 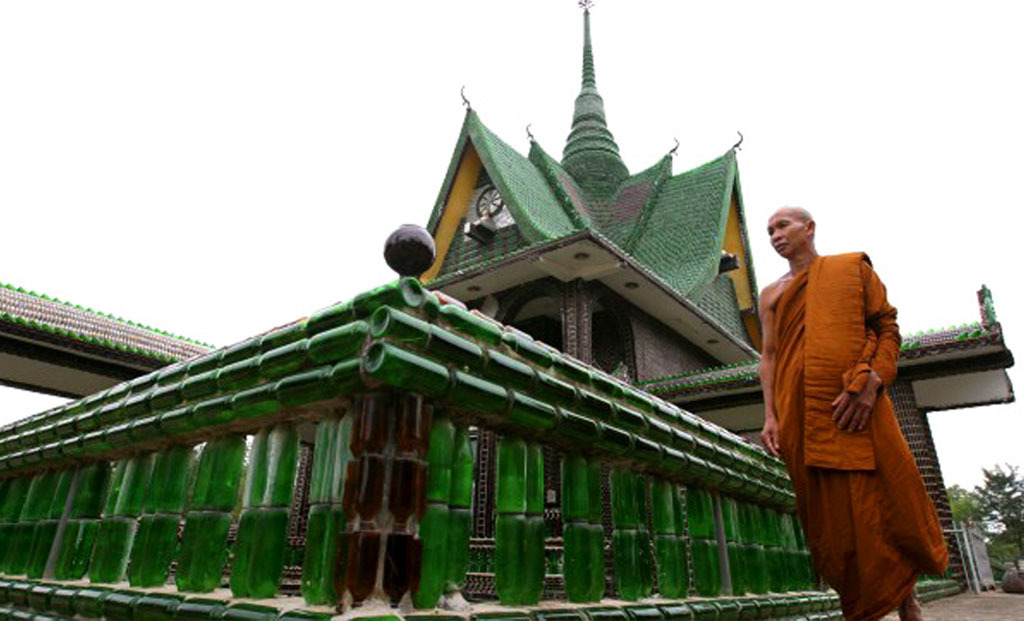 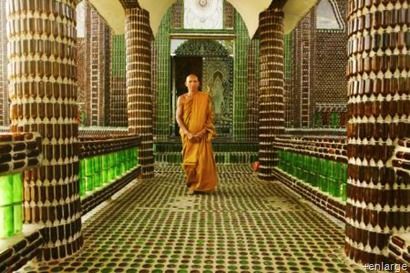 Buddhist monks in Sisaket Thailand used more than a million and a half recycled Heineken and Chang beer bottles to erect the build the Wat Pa Maha Chedi Kaew temple. With or without knowing it, they were fulfilling an “upcycling” dream once held by none other than the famous brewer Alfred Heineken and his Dutch architect friend John Habraken. As far back as 1963, Heineken designed a WOBO bottle (world bottle) which, after the refreshing consumption of the world-famous beverage that lies inside, could be used as bricks; but the vision was perhaps way ahead of its eco-design time.

Although countless buildings have incorporated bottles in their designs beforehand, the monks were really the first to make the concept successful, as the end result is not only aesthetically pleasing but also functional in more ways than one. For instance, glass is an effective insulator. Moreover, the transparency of the bottles offers extra lighting inside the temple. In addition, the colors of the bottles – green for the Heineken and brown for the Chang – bode well for the look and feel of the temple and the naturalistic tones inherent in Buddhism.

Recycling or in this case “upcycling” makes sense not only from an economical perspective, but also from a sustainability one. Even the bottle caps were used to create mosaics inside the temple.

Another design feature is with water drainage that is similar to that with a mountain. Natural irrigation can take place as water flows from the top of the building down through the vegetation at each level.

The monks have continued to expand the site and by 2009 some 20 buildings have been similarly constructed. 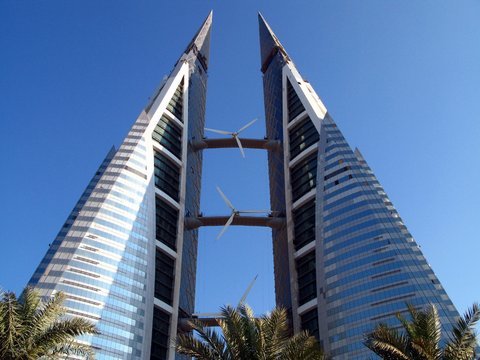 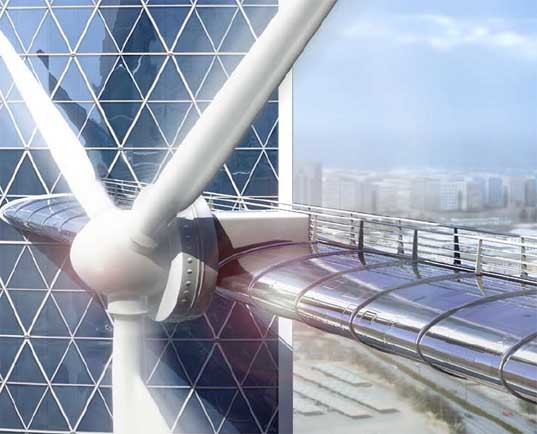 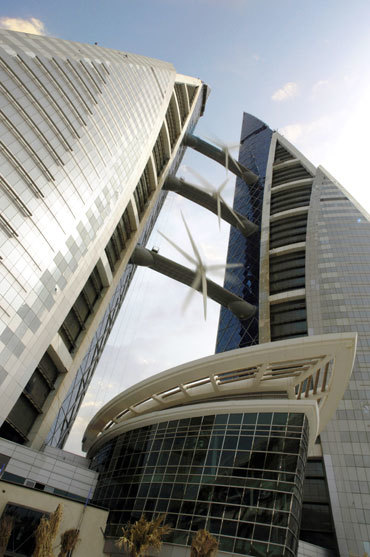 The Bahrain World Trade Center in Manama, Bahrain, is the first skyscraper in the world to integrate wind turbines into its design.

According to Wikipedia, the project has received several awards for sustainability, including: The 2006 LEAF Award for Best Use of Technology within a Large Scheme and The Arab Construction World for Sustainable Design Award.

The Trade Center is comprised of two triangular sail-shaped buildings connected with three sky bridges whereupon the wind turbines are connected. The turbines are quite large measuring 29 meters (95 feet) in diameter each and are aligned northwards, the direction from which air from the Persian Gulf blows in.

Also according to Wikipedia, the wind turbines are expected to provide 11% to 15% of the towers’ total power consumption, or approximately 1.1 to 1.3 GWh a year and are expected to operate 50% of the time on an average day.

The glitch though, according to Bert Blocken from the Eindhoven University of Technology, is that the Trade Center was built “the wrong way round”. Blocken argues that had the towers been built the other way round, it would have resulted in almost 15 percent more energy per year. The developers argue otherwise also emphasizing the importance that the towers face towards the sea. It is difficult to say who is right, as Mother Nature furnishes wind in varying ways over time; nevertheless, the towers do take advantage of her free energy as would a traditional Arabian Dhow on the sea.

Altogether, the Bahrain World Trade Center makes for an impressive building – both visually and in terms of sustainability. Metaphorically speaking, it’s as if towers are being propelled on the windy seas into a more sustainable future.