Using this list of online galleries, find a work of art from a culture other than your own that represents a form of spirituality. Explain why you chose the work you did, and how it represents the spirit. You will need to understand the context in which the artwork was made and how it is used within the culture.

Work of Art Chosen: A 1304 painting (possibly part of a scroll) by Gong Kai of a mythological character named Zhong Kui – the Vanquisher of Hugnry Ghosts, Demons and Evil Spirits. (Image URL: https://en.wikipedia.org/wiki/File:ZhongKui-by-GongKai.jpg) 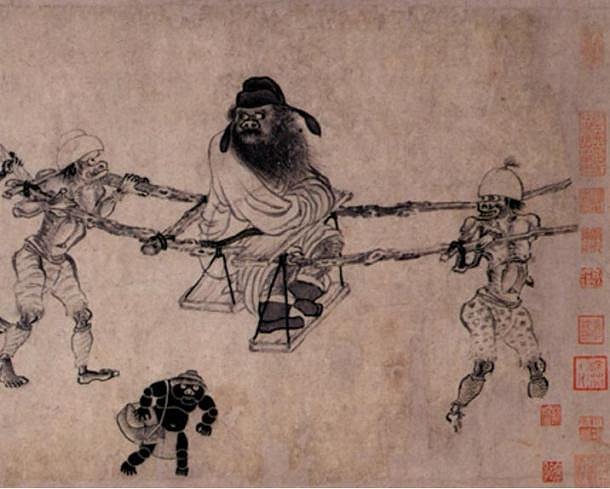 I chose this work because it depicts a fascinating mythological figure from Tang China. The painting’s main figure is that of Zhong Kui (鍾馗). Although there are varying versions of the tale (see sources below), he is believed to have the ability to vanquish evil ghosts, spirits, and demons. As a spirit and ghost hunter, Zhong Kui had even served Emperor Xuanzong by catching the small demon who had stolen his imperial consort’s perfume bag. To show his gratitude, the Emperor bestowed posthumous honors for Zhong Kui who then vowed to rid the world of mischievous demons.

The painting itself is a bit of a mystery, as there seems to be very little documentation for it – most likely due to how old it is. We can clearly see the main figure being carried by two skeletal-like figures. Only nobles in China were carried by servants; thus, we can safely assume that this is the figure that had received the posthumous title from the Emperor. here is a small black part animal, part human-like figure in the bottom of the painting; but it is difficult to ascertain whether it is an evil figure looking for trouble or something else. I would assume it to be the former, as an artist epicting Zhong Kui in a painting would most likely want to include an evil entity. As Zhong Kui’s stare is fixed on the servant in back of him rather than on the figure lurking in the foreground, it could be a sign that he isn’t impressed at all by the evil entity and could vanquish it at any moment. I would love to be able to travel back in time and hear Gong Kai’s (the rtist) take on the matter, but will have to settle with my version of the speculation for the time being.

Since the Tang era, Zhong Kui has appeared on numerous paintings and portraits hung on the walls of many homes and other areas to ensure protection against evil entities. If the painting or portrait has been blessed by a Taoist priest, it is believed to be at its most effective in repelling evil ghosts, spirits, and demons. Zhong Kui’s presence is particularly elcome and appreciated during Ghost Month and especially on Ghost Day (based on the lunar calendar) by Buddhists, Taoists, and folk religion believers.

This painting shows the stout Zhong Kui wearing ceremonial attire of an official, holding a stack of books in one hand and carrying a stringed instrument under his other arm. This is most likely intended to demonstrate the cultural refinement of this boorish-looking warrior, who, as the legend relates, once achieved top rank in the civil service examination. Zhong Kui is said to be himself the ghost of a man who failed to pass the civil service examinations and committed suicide. He then became a ghost hunter. There is a story that the once dreamed that a small ghost stole the purse of the imperial consort. A larger ghost - Zhong Kui - captured the smaller one and returned the purse. I chose the Virgin of Guadalupe (Miguel Gonzalez, Mexico City) because it represents a good combination between christian tradition and mesoamerican style. The woman represented is the Virgin Mary, who according to the myth revealed herself during the beginning of Spanish invasion in mexico. The artwork is realised by using different material, paint, mother pearl and wood. The little angel around the Saint, tells different moment of the miracle.
I think its interesting how every culture reinterpret figure belonging to the tradition and adapt it to their own personal culture and style. The light and the importance of the Woman are given by the material selected, the pearl is white and pure but at the sam etime precious. 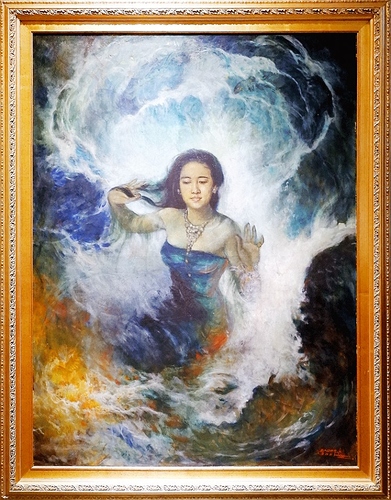 I chose this painting by Master Basoeki Abdullah. Basoeki Abdullah was an indonesian realist and a naturalist painter who believed in Javanese mythology. One of his masterpieces is a painting that depicts Nyai Roro Kidul , a beautiful mythical queen of the Southern Sea.

“To get the queen’s permission to paint her, he sat on a coral reef to do tirakat [a soul-searching ritual] in the Southern Sea in which he placed an empty bottle. When the bottle returned it was filled with water and a piece of white coral reef,” Tubagus said.

“How did the piece of coral and water get into the bottle? This might be hard to understood, but for Basoeki it was a sign that he had received the queen’s blessing.”

This painting have magical - big energy. In every national and international exhibition guest will stop bout 20-30minutes front of this painting. 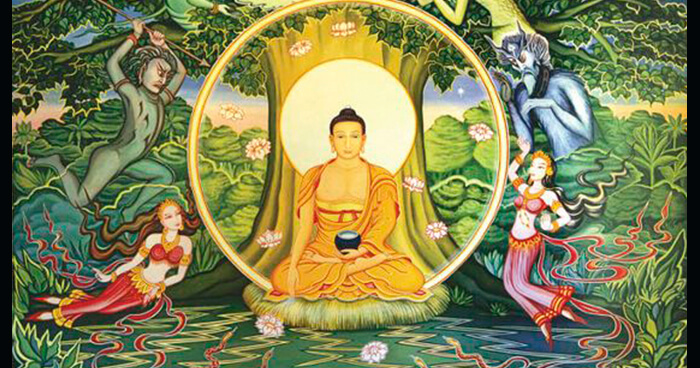 It is interesting to know how Art used in different cultures to presents their spiritual beliefs. Knowing this expands our horizon of learning Art and appreciating its outcome from various places, time, and history.
References: https://upliftconnect.com/four-main-spiritual-practices-tibetan-buddhism/
https://en.wikipedia.org/wiki/Renunciation 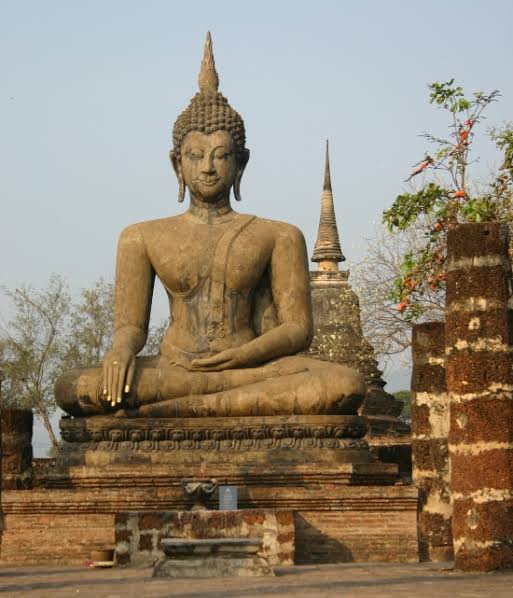 This painting show St. John the baptist hugging a lamb. I have chosen this piece of art as it shows the affection and pure love that the infant has for the lamb before it is sacrificed. It is the sacrificial lamb that holds significance here. It is being loved and adored by the infant. The truest and purest form of spirituality is love. That is what I believe. The time when this was made must have been a time of great religious importance placed on the lamb. It depicts God’s creation and His wish. The tool that the infant holds in his hands appears to be a hammer or some kind of weapon to sacrifice the lamb symbolically. It shows that even though we may have certain love for creatures or people, but when God wills it to be sacrificed, it becomes a holy deed. One has to conquer the self to fulfilling ones spiritual and religious duties as commanded by God.

I decided to discuss a painting of Jesus called heaven is for real. It is an amazing painting with the best detail. The story behind the painting is amazing also, an 8 year old girl made it and she has a lot more too. 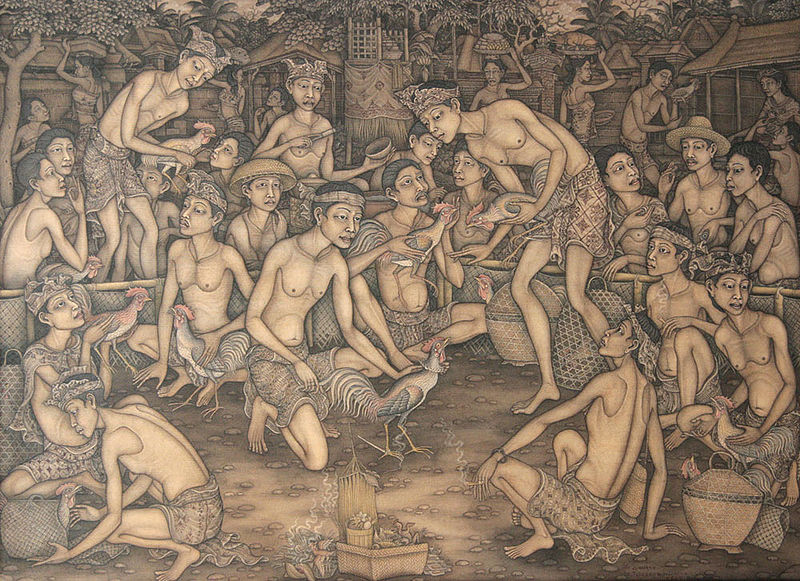 I chose this painting by I Ketut Ginarsa. I Ketut Ginarsa is an Indonesian Asian Modern & Contemporary painter. I Ketut Ginarsa took painting seriously when he started to learn from I Wayan Djudjul in 1970-1973, just after he finished his elementary school. Born in Tebesaya, Ubud, in 1953, Ginarsa is well known for his style of playing with composition and symmetrical forms. His objects are generally depicted in the centre of his canvas. He is also good at expressing himself through vivid colours. Goddess Sarasvati often appears as a popular theme in his paintings. Other than Sarasvati, Ginarsa also paint dancing scenes (Legong, Baris, and Barong dance), and daily life scenes.