Find two works of art from this list of online galleries. The first work should be two-dimensional, and the second should be three-dimensional. For each one, write four sentences describing the elements present in the work using the Formalist Method. This method describes what you see in a totally objective way. Do not refer to any subject matter. Remember, be objective in your descriptions. An example might be; “The work uses a majority of organic shapes”, or “It uses the complimentary colors yellow and violet for contrast”.

Then, for each work, write one sentence that describes your subjective reaction. An example might be “the artwork has a chaotic feeling to it”, or “looking at the work made me feel lonely”.

View and describe Winslow Homer’s painting ‘The Fog Warning’ from 1885. Try to interpret the meaning inherent in the work from the visual and contextual clues you see. Here is another link to Homer’s painting. Here you can compare your interpretation of the work to the curator’s text about it.

If I had to interpret the meaning inherent in the work with just one word, it would be “danger”. The life of a sailor has traditionally been dangerous. Certainly there are some wonderful aspects of being a sailor - travel, experiencing nature first hand, seeing things that people who have never been to sea will never have the opportunity to see. But being a sailor, especially in the 19th century, was fraught with peril. Even more so, the sailor in this picture is a fisherman which is obvious from the fish in the stern of his boat.

By the title, I imagine that the clouds on the horizon is the fog. The ship in the distance is likely the fisherman’s mothership and he is far out to sea. The mother ship is likely at least three miles away and he not only has to fight heavy seas which is dangerous enough, but he also has to race the weather. If he doesn’t get to the ship before the fog does, he could be lost at sea!

To answer this questins I am choosing two paintings from the current exhibition Exquisite Nature at the Asian Art Museum in San Fransisco.

The first piece is called “Fish and Waterweed” by Lai’an, active in China 1275 to 1300. The painting uses blank ink of paper to depict a carp heading downstream. The diagonal downward motion is in contrast to the wavy horizontal lines of the seaweed. The expressive lines accentuate the organic subjects of the painting. Points of pure black highlight the eyes, fin, tail and tips of the seaweed. The overall effect captures the joyous journey of this river fish.

The second piece is titled “Landscape After Old Masters” by Wang Yuanqi, active 1642-1715. Wang uses thin, delicate lines to show the craggy mountain. Expressive lines and points give the boulders and pine trees texture. A few geometric lines, indicate the dwellings of people, but they are almost hidden in the wild landscape. The shapes of the mountains and the branches of the trees rise up to the heavens, giving the piece a feeling of dynamic power and energy uncontrollable by mankind. 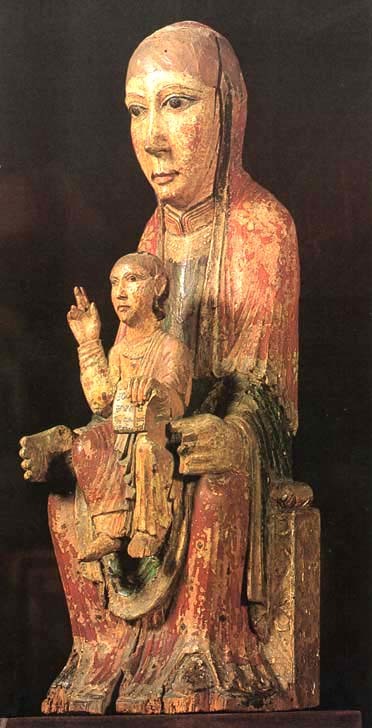 This piece is the Virgin from Ger, sculpture made in XII century.
It was made in wood and it had a lot of colours that have been lost over time. Predominant color is red. Forms of the sculpture are modified by artist. Eyes are bigger than normally should be, and has form of almond. We can see two important lines, one vertical and one horizontal formed by the knees of the kid and the hands of the mother. Sculpture is made to look ahead. 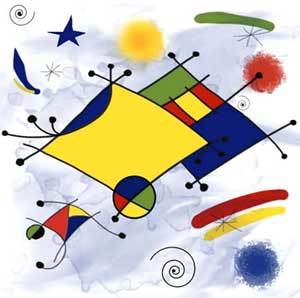 This painting is made by Joan Miró, in XX century.
Lines and points are very simple. This lines forms different elemental shapes as circle, rhombus and rectangles. Some shapes are delimited by black pencil and others are free. We can see different and primary colours with a big contrast. There are also a superposition of some shapes, although other are independents.

Is very difficult talk with objectivity about an artwork because we know somethings about it. To do it we must get the eyes of a child.

For my first work of art I chose this http://www.wga.hu/support/viewer/z.html
The work uses the primary colors of red, yellow, and blue for most of the painting. There are a lot of expressive, outline/contour lines to define shapes and lines in the painting. A linear perspective is used to create the illusion of 3d space. The painting has areas of high and low contrast. Looking at the work made me feel like this captured a significant event of importance.
For my second work of art I chose http://1.bp.blogspot.com/_gfXupHOEhH0/Sp7PE7IlZGI/AAAAAAAAJWU/NT-bdv21e6o/s400/statue31.jpg
The work uses tertiary and neutral colors of brown and grey. The work has a heavy mass and form. The work overall has a smooth texture. The point of the work is the head. Subjectively, looking at this work makes me laugh and feel happy.

The two-dimensional image I have selected is “Bamboo and rock” by Deng Yu, ca. 1360-67. The painting is monochrome, with varying shades of black ink. The artist uses different values of the color to create the visual texture of the leaves. The artist also uses expressive lines to denote the organic shapes of the bamboo and rocks. The painting is done on a scroll, so the background has some natural texture ans color gradation, due to the material. The painting gives a sense of peace, but also one of isolation.
The three-dimensional image I have selected is “Bodhisattva Avalokiteshvara,” a 12th century Chinese bronze figure. The figure has many engraved details. The lines on his rove imply drapery and a free-flowing fabric. The figure was originally a single color, but it has tarnished over the years. The figure is slender and appears lighter than it likely is. The face of the figure appears serene and calm.

Gareth NyandoroMukanya Repairs
The painting/drawing uses the three primary colours, however for the blue and red shades are created using black, Black paint/ink is used to draw the subject matter. The lower part of the canvas is largely left blank though some colour and black is allowed to create drip lines and is used for occasional patches of colour in the lower part.
The surrounding negative space gave a sense of business and industry to the workshop space and suggested that there was more to the man in the workshop than what meets the eye.

3-D Carl Andre # 26 STRAIGHT SHORT PIPE RUN (MOMA)
This is a 3 dimensional line in space. The line has mass and is made of a long narrow curved surface enclosing space. The undulating metal creates an organic line from hard metal. This line undulating is superimposed on parallel lines on the floor creating a contrast with the hard lines of the (organic) timber.
I am attracted to the vulnerability I see in the organic apparently random shape of the line.

(The Bull-leaping Fresco IS A TWO-dimensional Fresco.).the value boarders the Dark tone of the depiction of the bull leaping custom.The dark tone of the custom has a grayish blue background,and a biege highlight of the leapers. The bull has orange marks to depict it is a bull, and the rider is Red to make the viewer focusing on the bull. There is no actual texture, because it is a Fresco.
(FUNERARY Mask is a three dimensional object.)popularly known os “the mask of Agamemnon”the space depicts the (Greek leader in the Trojan War.)thé value depicts that it is a face, andto be placed over the dead man’’s face.the color is gold, probably because It’s a high color for the Greek leader in a war. The texture depicts a beard , and a moustache, giving the mask more detailed facial features to be placed on the dead man’s face.

To answer this questins I am Selecting two interesting show-stoppers from the present presentation Exquisite Nature at the Art Gallary in Milano.

The master piece is arranged “Black stone and Cat” by Luain Lee dynamic in Italia 1768. The work of art uses clear ink of paper to depict a carp heading downstream. The corner to corner slipping development is instead of the wavy level lines of the sea development. The expressive lines feature the common subjects of the masterful creation. Reasons for unadulterated dull component the eyes, parity, tail and tips of the sea development. The general effect gets the cheery journey of this stream.

The resulting picture is titled “Samual’s Ranchers” by William Cottwel dynamic 1965. uses feeble, delicate lines to show the unpleasant mountain. Expressive lines and centers give the stones and pine trees surface. Several geometric lines, exhibit the habitations of people, anyway they are about concealed in the wild scene. The conditions of the mountains and the pieces of the trees rise to the sky, giving the piece a slant of dynamic power and imperativeness wild by mankind. Important art by Kirchner with artwork analysis, influences, achievement, and overall contribution to the arts.


Nude Dancer by Kirchner (1909)
The woodwork print is very essential. The artist use only two colors (orange-black) where the contrast is created by the use a warm and a cold color and by the solidity of the texture. The lines are thick and solid as well, and resemble primitive art. Famous artists and art of Romanticism with analysis, achievements, and overall contributions to the arts.


The Nightmare Henry Fusely 1781
The center of the paint is the laying body of the woman, the only point hit by light. The colors used are white (also symbol of innocence) and black (the night, the unknown). The lines are sinuous and create a sense of tension.