The following study guide is to help you prepare for the final exam. The material is for your practice and review only. As you work through these study guides, pay attention to your confidence level with the material. As you grasp the following information, notice how comfortable you are with the content. When you read it, much of it is intuitive and you will find you probably know much more about leadership and teams and the related topics than you thought.

Effective leaders must be adaptable, especially in turbulent and uncertain times.

There are three primary areas in which leaders may experience failure. In each of these contexts there exist a variety of knowns and unknowns that are useful to consider. These areas of interest are outlined as follows:

Leaders tend to exhibit a certain degree of arrogance after years of success and power, an attribute that often leads to a communications disconnect with their subordinates and coworkers. Failure to connect with others has led to the downfall of many great leaders. Not listening is very commonplace, and this can be a leader’s fatal flaw. Today’s leaders should focus on the events around them, paying critical attention to both their subordinates and coequals.

Contextual intelligence refers to one’s capacity to accurately identify all of the essential factors in an event or situation; this includes evaluating factors accurately, developing an appropriate strategy for future action, and responding as appropriate. The proliferation of advanced technology, changing global economies, and improved accountability to corporate stakeholders has drastically increased the variables that play into each and every one of these situations. As such, leaders need to explore the vast areas to which they are unfamiliar. The failure of a leader to effectively identify and analyze these factors can result in poor or inappropriate decisions.

The self drives our ambitions and aspirations. Having self awareness requires introspection, open and honest communication with others, and a willingness to respond to negative feedback. Unfortunately, many leaders find self awareness very difficult to attain, resulting in actions and behaviors that can lead to failure. It is not uncommon to confuse experience with self-awareness; leaders should be careful to understand how their actions affect others and fit into the organization as a whole.

Researchers have identified distinct influence tactics and discovered that there are few differences between the way bosses, subordinates, and peers use them. There are nine influence tactics (rational persuasion, legitimizing, personal appeals, exchange, integration, pressure, coalitions, inspirational appeals, consultation). Responses to influence attempts include resistance, compliance, or commitment. 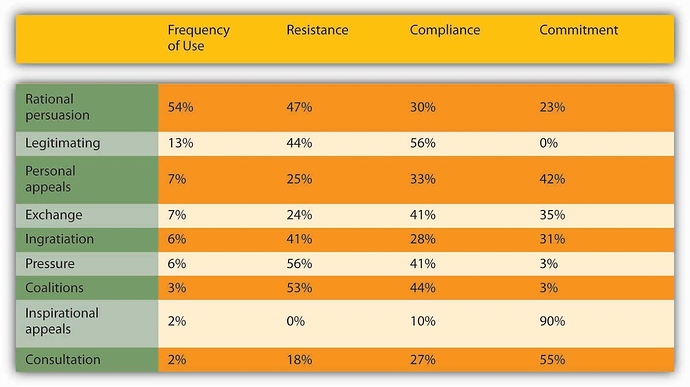 Learning Outcome: Discuss the stages of team development and the dynamics of managing teams, and apply these concepts to a specific example

In organizations, groups can be classified into two basic types: informal and formal. Informal work groups are made up of two or more individuals who are associated with one another in ways not prescribed by the formal organization. Formal work groups are made up of managers, subordinates, or both with close associations among group members that influence the behavior of individuals in the group.

Groups go through developmental stages much like individuals. The Forming-Storming-Norming-Performing-Adjourning Model is useful in prescribing stages that groups should pay attention to as they develop.

The Punctuated-Equilibrium Model of group development argues that groups often move forward during bursts of change after long periods without change. Groups that are similar, stable, small, supportive, and satisfied tend to be more cohesive than groups that are not. Cohesion can help support group performance if the group values task completion, but too much cohesion can also be a concern for groups. The factors affecting group cohesion include:

A key to successful team design is to have clear norms, roles, and expectations among team members. Norms are shared expectations about how things operate within a group or team. Just as new employees learn to understand and share the assumptions, norms, and values that are part of an organization’s culture, they also must learn the norms of their immediate team. This understanding helps teams be more cohesive and perform better. Norms are a powerful way of ensuring coordination within a team.

Questions that can help to create a meaningful team contract include:

Barriers to effective teams include the challenges of knowing where to begin, dominating team members, the poor performance of team members, and poorly managed team conflict.