“Modern politics is rife with examples of Machiavellian thought. If Machiavelli were alive today, would he be a liberal or conservative? A libertarian or fascist? Why?”

I think if Machiavelli were alive today, he would be a conservative. Why? For one thing, I don’t know of many liberals who would advise giving your people guns, at least not in today’s society. Further, it seems he leans toward a fascist stance. Perhaps I have my definitions wrong, but it seems he leans more towards giving the power to the people, but only so long as they show potential for it. He also seems to think that being a long time ruler is directly linked to your standing with the people, suggesting the idea that to stay in power you must keep the people happy.

Please feel free to comment your thoughts below! I’m curious to know what others’ thoughts are!

"In his “Second Treatise,” John Locke maintains the natural liberty of human beings; all people are born free, and the attempt to enslave any person creates a state of war. Yet Locke himself had invested in the slave trade and drafted the Fundamental Constitutions of Carolina which granted absolute power over slaves. How do you think Locke reconciled his beliefs with his actions (if at all) regarding slavery?”

That’s a tough question to answer… Often it’s said that actions speak louder than words. It would seem that Locke deemed the financial gain of the slave trade to be greater than the injustice of it. Then again, it doesn’t seem completely clear as to the timeline of events. For instance, John Newton, who had been the captain of a slave ship early in life only to later realize the injustice of the slave trade and change his position so completely that he then fought to abolish slavery. This very well could have been the same thing to happen to Locke.

Again, this is simply one humble opinion, so other opinions are very welcome!

I think If Machiavelli were alive today,he would be a liberal because it seems he he leans more towards giving the power to the people.

In giving arms to his followers, only, the Prince is just pretending to show his appreciation for their support, and not for empowering them, because to these their arms will be taken away eventually, and after he gets all under his control.

As of keeping the people happy, He surely needs to maintain good relationships with the rich and powerful, because these have authority over other people who are subject to them by employment, or other.
Adding that, to be at least no hated by the common population, the Prince needs to be in good standing by celebrating special dates or awarding exceptional people.
All of these he can surely do without giving away authority or showing weakness.

I think if Machiavelli were to be alive today, he wouldn’t have been a Liberal, conservative nor a fascist.
but rather he would have constitute Anarchism in some ways because his conception of virtue departs from that of his predecessors and contemporaries – a departure that is central to his framework and substantiates the importance he places on arming citizens.

I think that if Machiavelli were around today that he would be categorized as a fascist. Perhaps a fascist with conservative leanings because of his belief in traditional authority, or authority that is not often questioned and respected as much as a prophet of one’s religion would be. The fascist aspect comes into play when he states, for instance, that it is better to be feared than loved. He was a fan of Cesare Borgia which shows us that he was not afraid to support cruel, and violent leaders as long as they accomplished their goals and eventually united and brought peace to lands. Ends justifying the means is a fascist way of thinking.

Why did Locke write on the topic of slavery in a negative way – speaking out against it – and yet support the trade financially, and in other ways? Some people say things simply for the recognition or the acceptance – maybe he had ulterior motives. Or perhaps it was a guilty conscience that made him write these things. Deep down, perhaps he knew it was wrong, but still fell for the temptations of wealth and power in the end. This kind of thing shows us that we should be careful in not believing everything people say.

If Machiavelli were alive today, I think that he would be a liberal and a facist because of his desire for complete authority.

John Locke believed the slavery to be the cause of many wars. He, however, had slaves of his own. This hypocrisy could be due to the fact that businesses and financial well being were dependent on slaves. Therefore, as wrong as it may seem, for Locke to not have slaves would have left him destitute. 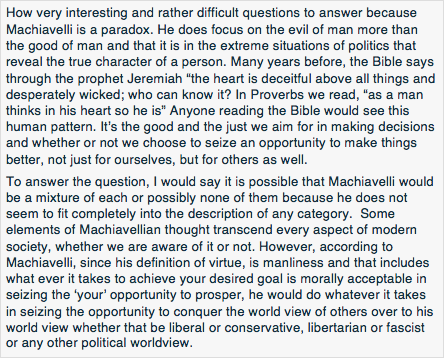 How very interesting and rather difficult questions to answer because Machiavelli is a paradox. He does focus on the evil of man more than the good of man and that it is in the extreme situations of politics that reveal the true character of a person. Many years before, the Bible says through the prophet Jeremiah “the heart is deceitful above all things and desperately wicked; who can know it? In Proverbs we read, “as a man thinks in his heart so he is” Anyone reading the Bible would see this human pattern. It’s the good and the just we aim for in making decisions and whether or not we choose to seize an opportunity to make things better, not just for ourselves, but for others as well.
To answer the question, I would say it is possible that Machiavelli would be a mixture of each or possibly none of them because he does not seem to fit completely into the description of any category. Some elements of Machiavellian thought transcend every aspect of modern society, whether we are aware of it or not. However, according to Machiavelli, since his definition of virtue, is manliness and that includes what ever it takes to achieve your desired goal is morally acceptable in seizing the ‘your’ opportunity to prosper, he would do whatever it takes in seizing the opportunity to conquer the world view of others over to his world view whether that be liberal or conservative, libertarian or fascist or any other political worldview.

Locke in may ways seems to be himself an oxymoron in that he was very careful and cautious in admitting his beliefs one way or another. Based on his theory of natural liberty it seems Locke would agree that slavery was wrong because no one has the right to rule another without their consent. However he also believed in the acquisition of property and capitalism. In order for him to acquire property and pursue business it would seem he needed to agree with the right to own slaves. Because Locke is careful not to disclose his personal beliefs I don’t think we can know for sure how he reconciled his actions regarding slavery from just reading his 2nd Treatise.

I believe if Machiavelli were alive today he would be liberal because he believed that naturally people tend to work for their own best interest. This is parallel to the liberal position of letting go of traditional views. He would be libertarian because his views lean more towards free will I believe.

At that time and even still today, only certain “men” were consider people. By law blacks or African Americans… then slaves… were considered on 1/3 of a person individually. I believe is how Locke and many others were able to reconcile their beliefs in regards to equality. It allowed them to participate in the cruelty and unjust practices of slavery guilt free.

Actually for today’s continuous political change, there are alot of things to contradict Machellvaili notion will look like an outdated issue. It might be rational, seeing that the floors have already been taken be democratic notion thougth it isn’t actually translated in tangible reality

If Machiaveli was alive today, he should be liberalist and fasist . Liberalist because he respects the people, he teaches the Prince to respect his people not to be hated for hated he has more chances to be overthrown or killed by his enemies. This regard to the people of Machiavelli shows a liberalist spirit. On the other hand, he should be fasist for we have the impression that his emphasis on how to hold and maintain power. His exposé contains what some can quality of evil ideas by asking the Prince to be sometimes a heartless person before his enemies to be feared .

If Machiavelli were alive today, I think he would become a part of whichever political party he thought had the most stability and advantage–the one he believed had the best opportunities to gain influence and power. He did not place much importance on the values that political groups seek to uphold–this is made clear in chapter 15 when he states his belief that it is foolish to imagine an ideal state and then work to make that state a reality by behaving in a way consistent with that ideology. Rather, his emphasis in The Prince is that a ruler should focus on how to rule most effectively in whatever political system that fortune and his own virtú have placed him in.
Also, I think that his views as expressed in The Prince align him more with fascism than with libertarianism. Like fascist leaders throughout history, he valued the good of the state as a whole over the good of the individual. It is also revealing that Mussolini admired Machiavelli and wrote a commentary about him.

I think that if Machiavelli were alive today, he would be a fascist, because he considered the good of the state above the good of the individual. He also declares, for example, that it is better to be afraid than to love.