The concept of sustainable technology is not new, from my personal experience the first time I was confronted with environmental problems was when hearing of a revolutionary book (Silent Spring) by an unknown American journalist called Rachel Carson that explained the sanitary tragedy. Of people that moved to a new urbanization built in an old cemetery of insecticide residues(1)
Since the far sixties a lot has been made to take care of our environment, and much more has been spoken, the global effectiveness has been variable (2,3)
In architecture we found a growing effort to follow the sustainability pathway,with two main obstacles: mentality of society as a whole and poor focused economy Nevertheless we can found outsanding examples of what is called the green architecture:
1.–The AGBAR Tower (2005)
Result of collaboration between the French architect Jean Nouvel and the Catalan architecture studio b720,
A changing colour building, 144 m hight and more than 4500 windows, which are motorized allowing to regulatethe interior temperature, some parts of the façade are made of photovoltaic panels that generate electricity(4).:

2.-Turf Houses in Iceland. (5,6)
In order to protect agains the extreme coldness of the island the traditional building in icelenad was of a wooden frame house with the roof covered by square blocks of turf. which is very abondant in all the island(7). Its origen dates back from the first settlers of the IXth century.Actually they have been proposed as a cultural world heritage

Six-stores office building with two stepped facades covered with vegetation. The green area is about 60.000m2 with 8 km of hornbeam hedges. It will act as a green lung in center Düsseldorg to improve air quality and disminish city island warming effect. It is designed by the ingenhoven architects. Actually it is the Europe’s largest green façade(9,10) 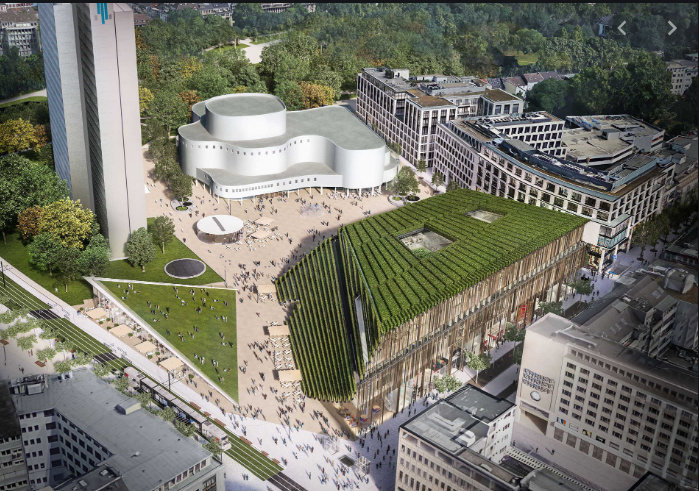